United Nations Secretary-General António Guterres during his video message on the International Day for the Elimination of Violence against Women and Girls.

NEW YORK, United States - In his video message marking the International Day for the Elimination of Violence against Women and Girls (25 November), United Nations Secretary-General António Guterres highlighted the work of Spotlight Intiative and the need to invest in long-term strategies that prevent violence against women and girls.

"More than 650,000 women and girls were able to access gender-based violence services, despite restrictions related to the pandemic." - UN Secretary-General António Guterres

“Violence against women and girls continues to be the most pervasive and pressing human rights issue in the world today. It is both an abhorrent crime and a public health emergency, with far-reaching consequences for millions of women and girls in every corner of the globe,” he said.

Mr. Guterres said that across 13 countries, almost half of all women reported that they or a woman they know began to experience gender-based violence during the pandemic.

"But violence against women is not inevitable. The right policies and programmes bring results,” he continued.

"That means comprehensive, long-term strategies that tackle the root causes of violence, protect the rights of women and girls, and promote strong and autonomous women’s rights movements. This is the model that the United Nations has built through its partnership with the European Union, the Spotlight Initiative.”

"Last year, in partner countries, we saw a 22 per cent increase in prosecution of perpetrators. Eighty-four laws and policies were passed or strengthened. And more than 650,000 women and girls were able to access gender-based violence services, despite restrictions related to the pandemic."

Find out more about Spotlight Initiative's work to end violence against women and girls in the 2020-2021 Impact Report, Rising to the Challenge. 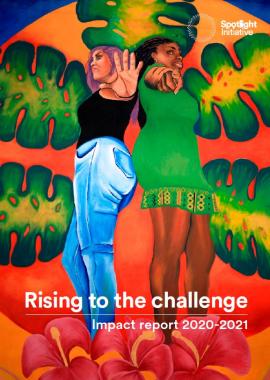